You won't miss the fish in this vegan sushi recipe! Instead, marinated beets, cucumber, and avocado create a fresh, fun, and flavorful filling. 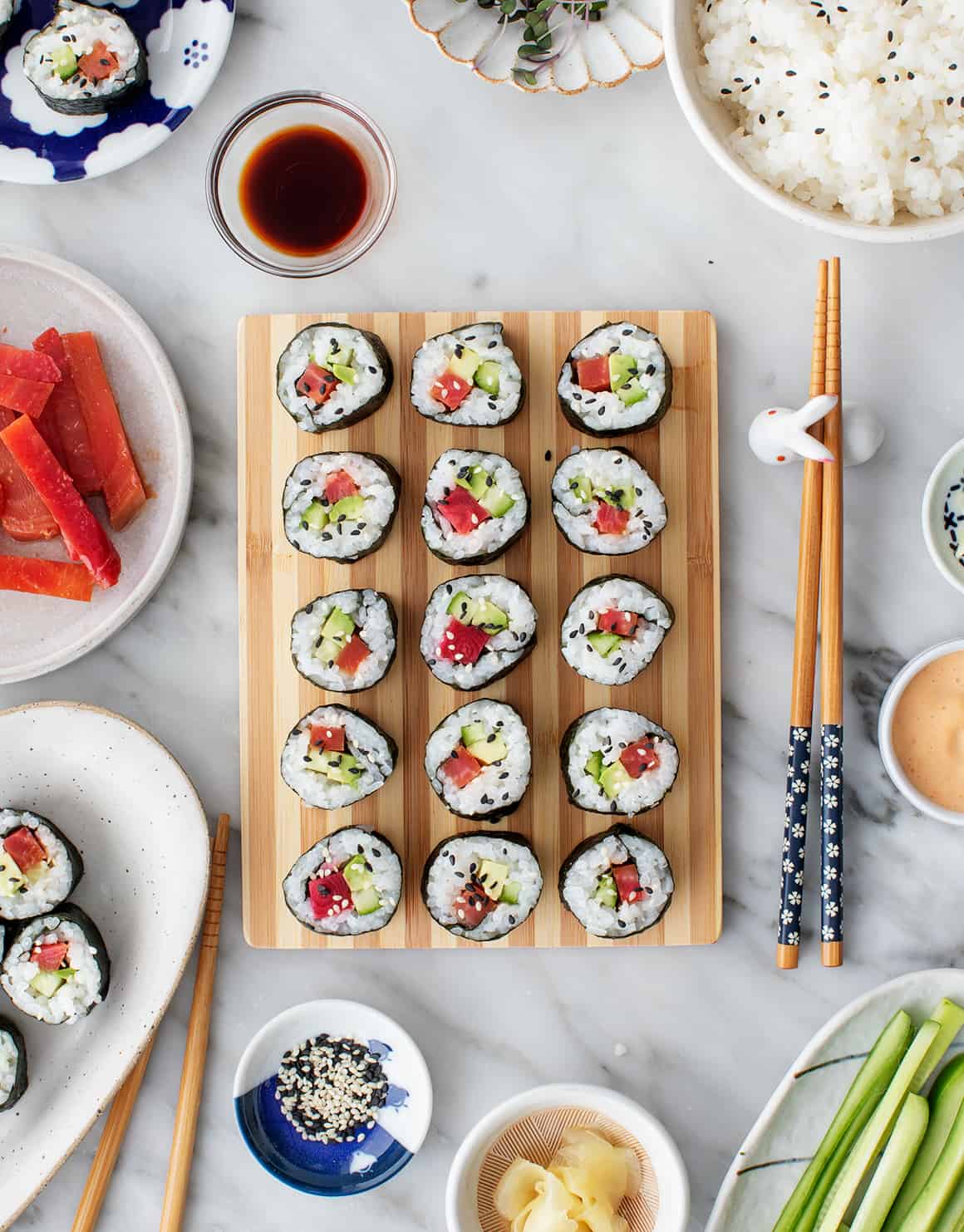 I’ve shared vegan sushi recipes before, but earlier this winter, I thought of another idea that I just had to try. I wanted to make vegan sushi that looked like, well, not vegan sushi. I thought that if I marinated pink Chioggia beets they’d look pretty darn similar to tuna. How cute would that be?! There was just one problem: Jack hates beets.

Sure, he’ll eat certain beet recipes from time to time, but that only happens when I put a dish in front of him and don’t tell him what’s in it. And in our house, vegan sushi is one thing we always make together. I prep the filling, and Jack assembles the rolls. I really couldn’t do it without him…

Until this winter! After a few very messy rolls and some pointers from Jack (I kept the beets out of sight), I succeeded in making this adorable vegan sushi. I mean, doesn’t that look like fish?! I loved it, but of course, it had yet to pass the real test. When Jack finally tried it, I knew I had to share this vegan sushi recipe. Beets notwithstanding, he polished it off in no time. 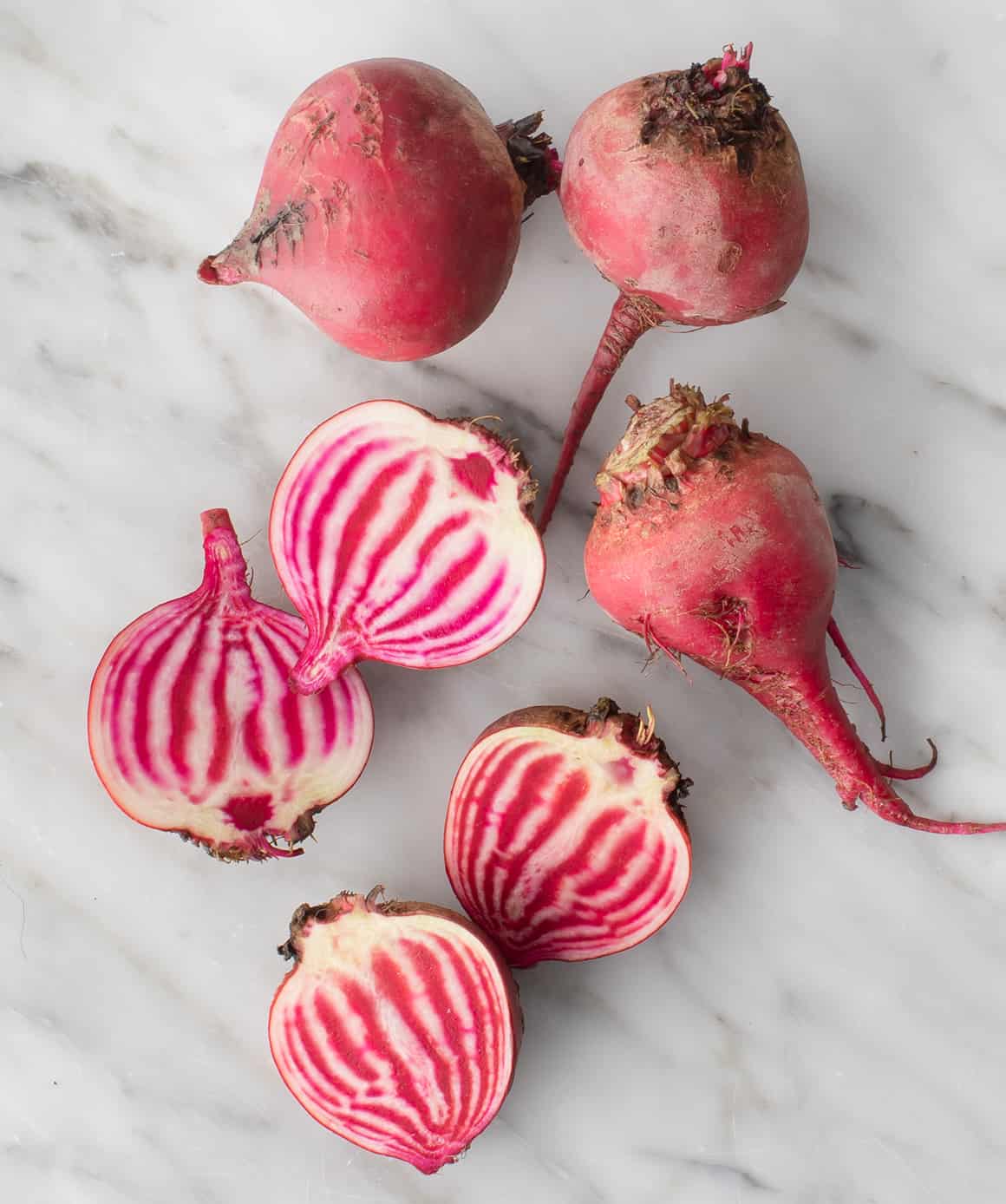 In the past, I’ve made vegan sushi without any sort of “fish.” Instead, I’ve used medleys of produce like cabbage and shiitake mushrooms and mango and avocado. The rolls are great, but I think the tuna-like look of this vegan sushi is just so fun!

For this recipe, I recommend seeking out Chioggia beets as opposed to red or golden ones. They have a pretty pink and white pattern, which gives this recipe its signature look. 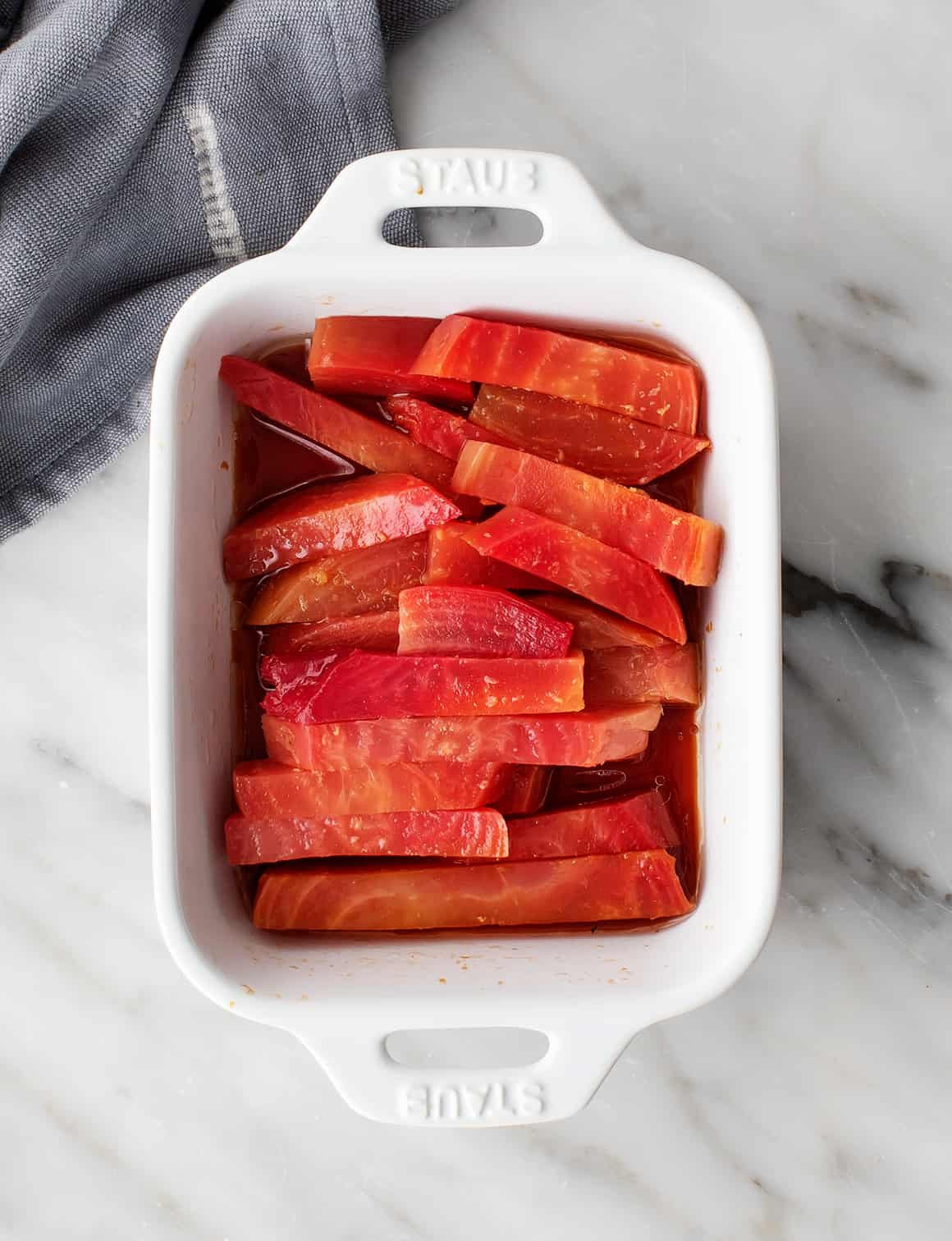 To prepare them, roast the beets for 45 to 60 minutes, until they’re soft and fork-tender. Allow them to cool slightly. Then, slip off the skins and slice them into strips.

Finally, marinate them! Made with tamari, rice vinegar, sesame oil, and ginger, the marinade infuses the beets with tangy, nutty flavor. 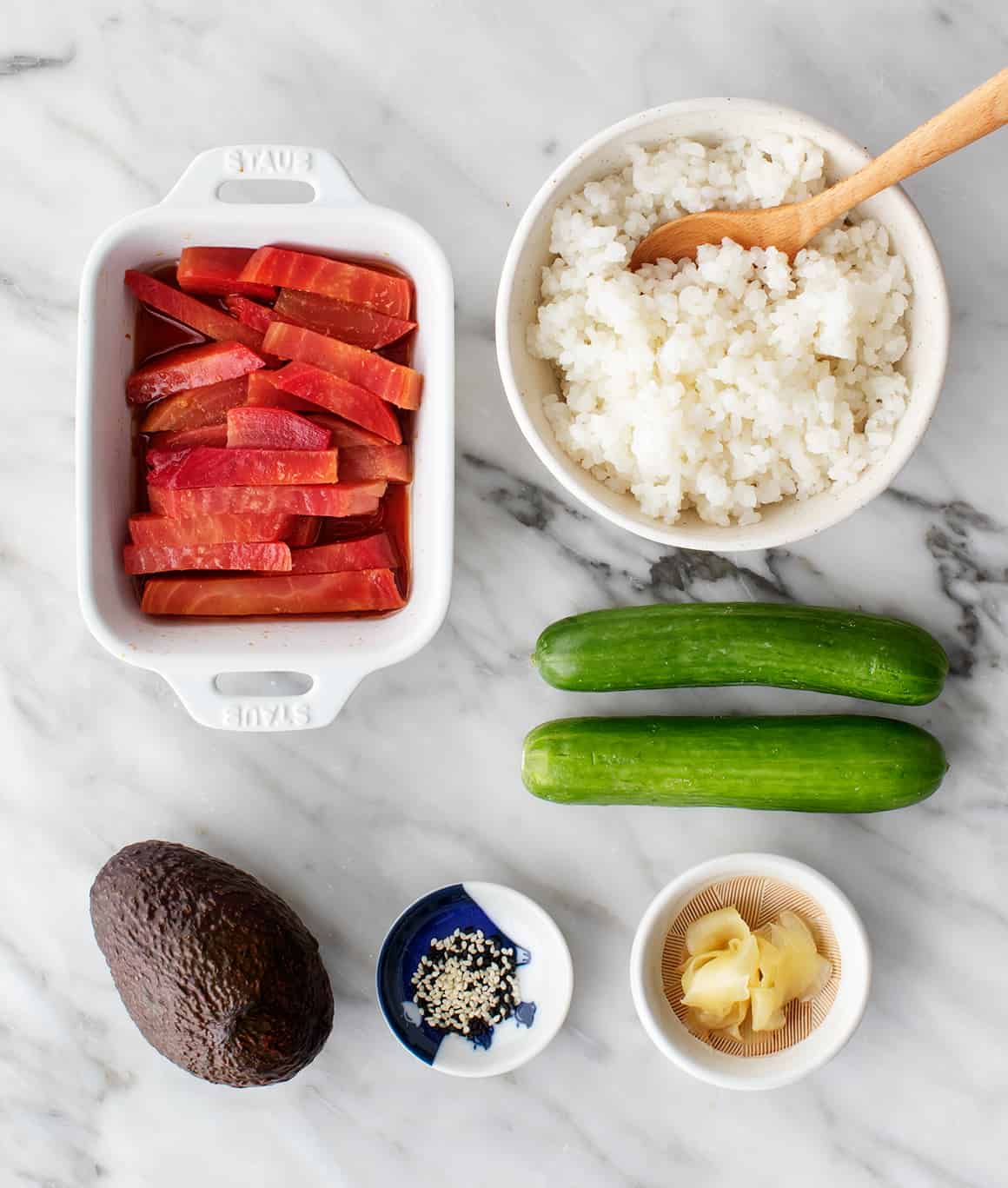 While the beets are marinating, prep the remaining ingredients: 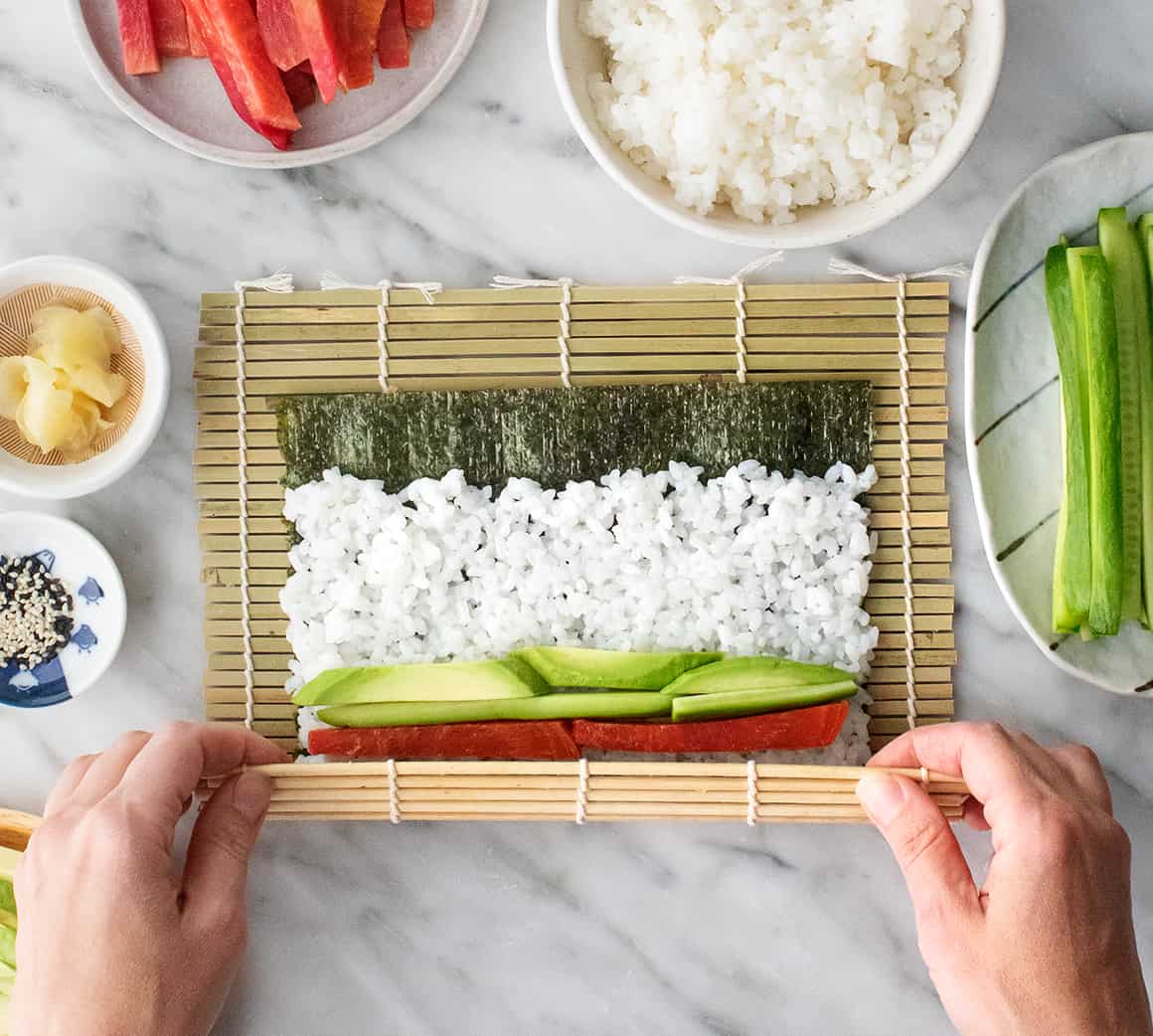 How to Make Vegan Sushi

If you’ve never made sushi at home before, don’t let it intimidate you. It’s surprisingly easy, and even if your rolls don’t look perfect, they’ll still taste great! Here’s what you need to do:

First, assemble the sushi ingredients on a bamboo sushi mat. Place a nori sheet glossy-side-down on the mat, and press a handful of the cooked rice into the lower two-thirds of the sheet. I like to keep a bowl of water and a kitchen towel nearby for this step. Your hands will get sticky!

Near the lower edge of the rice, place a row of the beet, cucumber, and avocado. Don’t add more than a single layer! Otherwise, your sushi will be difficult to roll. 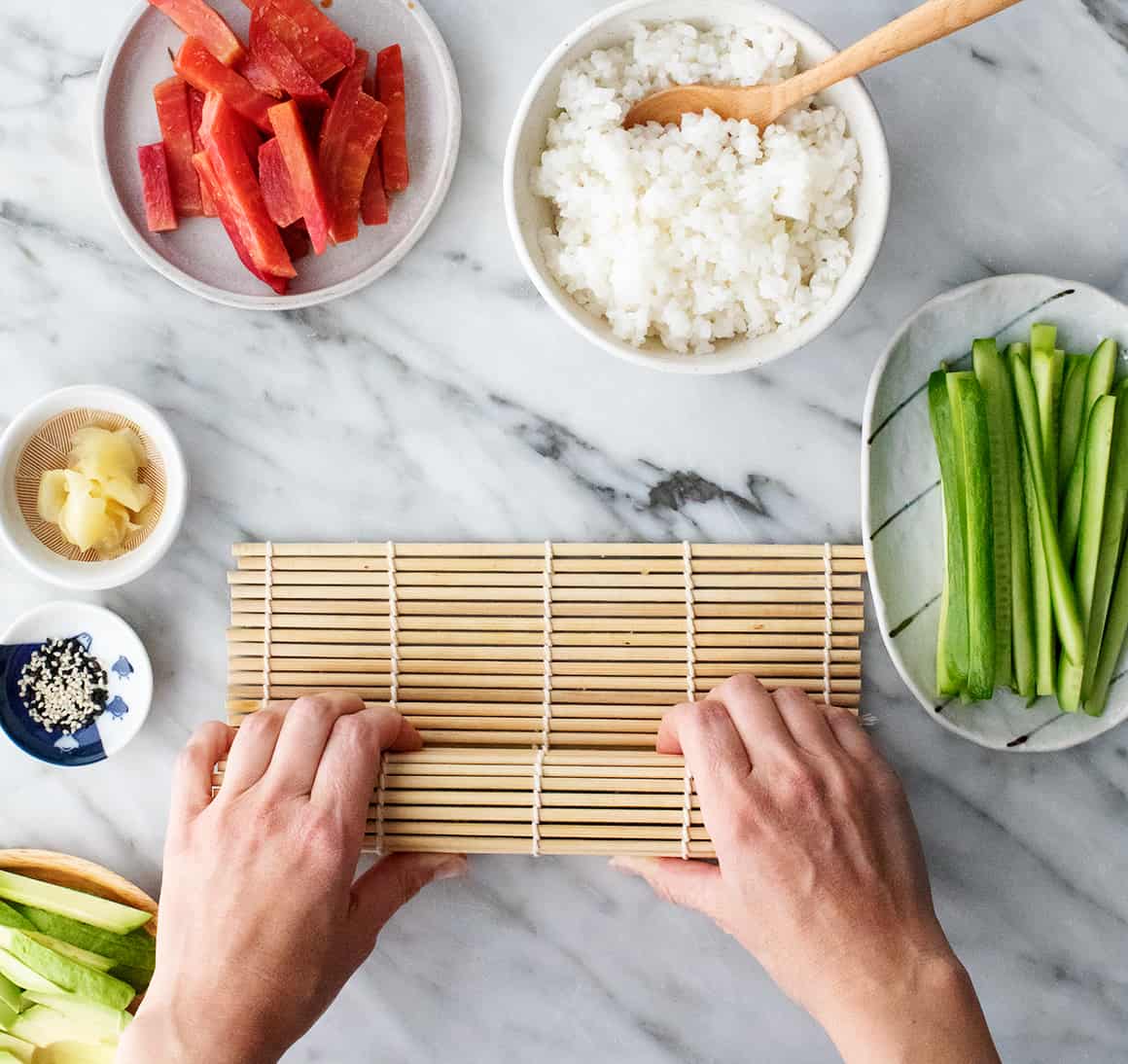 Next, roll! Lift the lower edge of the bamboo mat, and use it to tuck and roll the sushi into a cylinder. Use the mat to gently press and secure the roll. This step will prevent it from coming apart when you slice it.

Remove the roll from the mat, set it aside, and repeat the rolling process with the remaining ingredients.

Finally, slice and eat. Use a sharp knife to cut the sushi into rounds, using a damp towel to wipe off the knife between cuts. Enjoy! 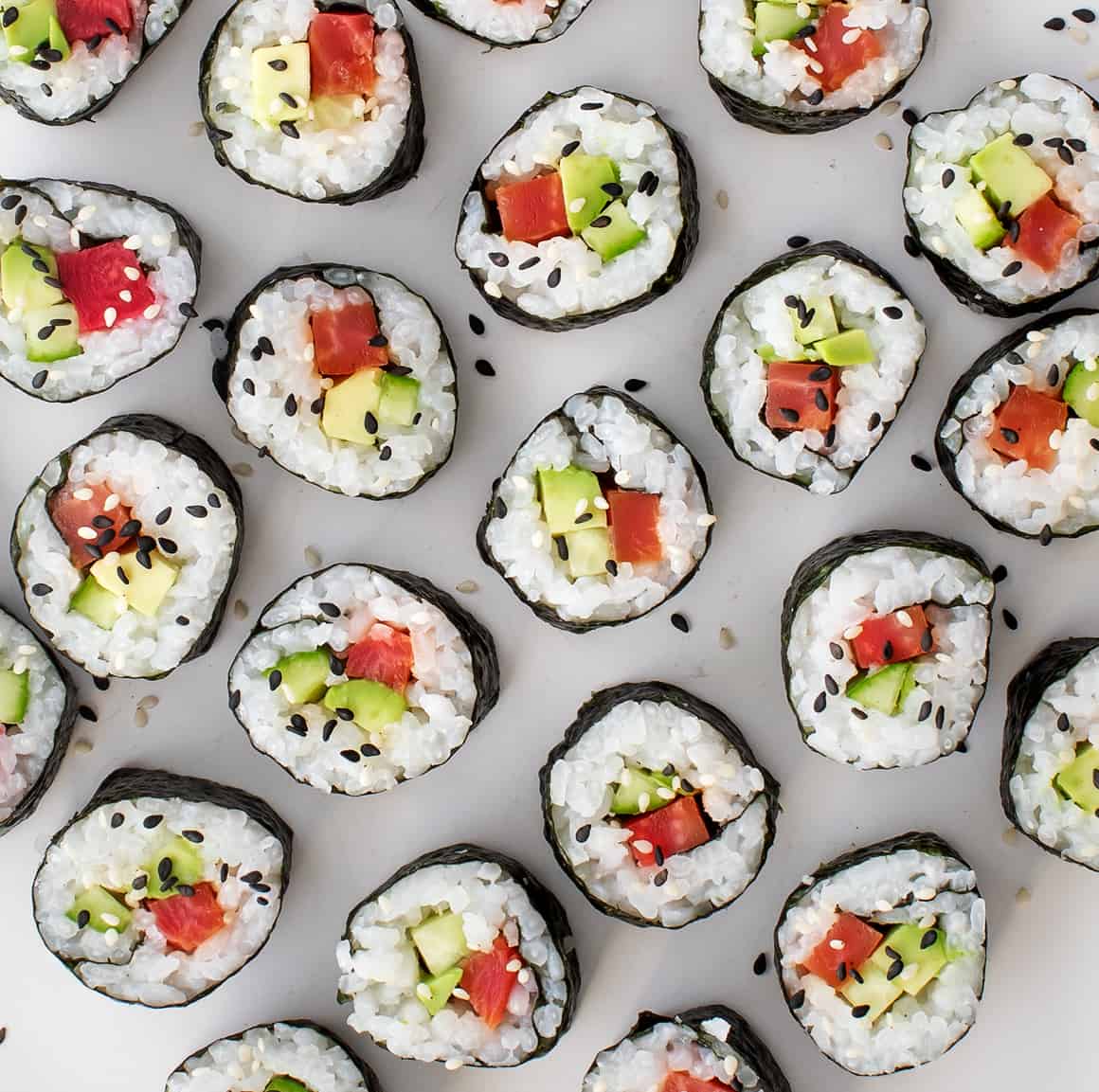 I like to serve my vegan sushi rolls with sesame seeds and pickled ginger, which highlights the gingery flavor of the marinated beets. It’s yummy just like that, but it’s fantastic with a dipping sauce too. Serve it with plain tamari, soy sauce, or a creamy blend of vegan mayo and sriracha.

Round out the meal with a hot bowl of miso soup! 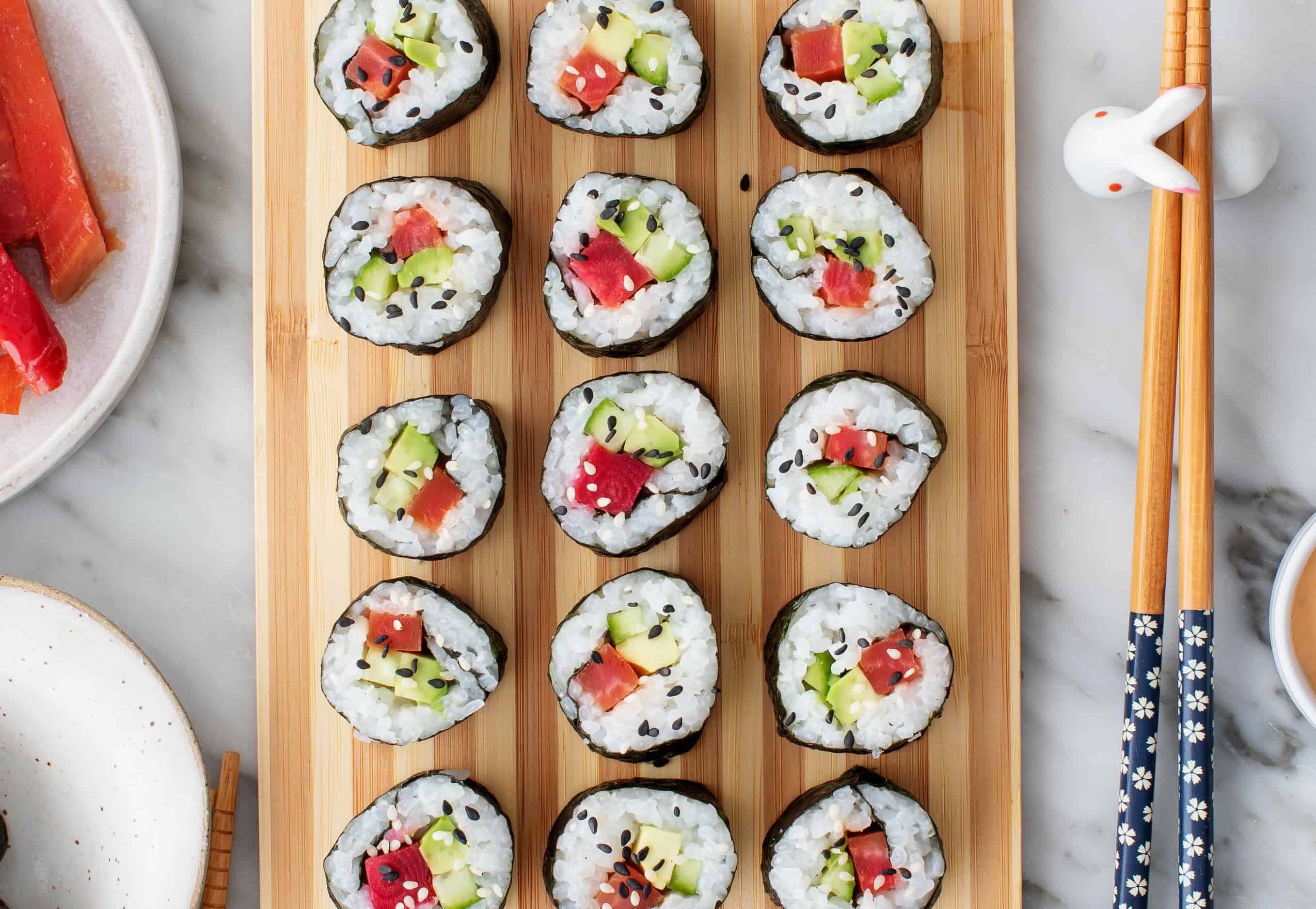 If you love this easy vegan sushi recipe, try one of these healthy cooking projects next: 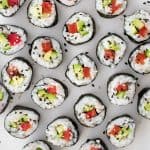 rate this recipe:
5 from 7 votes
Prep Time: 30 mins
Cook Time: 1 hr
Serves 4
Pin Recipe Print Recipe
This easy vegan sushi recipe is so fresh and delicious! I love serving it with vegan sriracha mayo for dipping and a bowl of miso soup on the side.