This vegan potato salad is fresh and summery, with a bright lemon dressing and lots of crunchy veggies. A perfect side dish for a picnic or cookout!

I served this vegan potato salad at our Father’s Day cookout a few weeks ago, and it was a huge hit. My family loved it, even though it’s not at all like the classic potato salad they’re used to. Instead of having an ultra-creamy dressing, it’s tossed in a bright lemon vinaigrette. In addition to potatoes, it’s filled with herbs and lots of crunchy veggies. A drizzle of rich, tangy vegan sour cream takes the whole thing over the top.

All together, this vegan potato salad is fresh, flavorful, and summery. It’s one of my favorite salads I’ve made this season (and I’ve made a lot of them!). I think you’ll love it too.

How to Make This Vegan Potato Salad

You can think of this vegan potato salad recipe in three parts: making the dressing, cooking the potatoes and green beans, and tossing everything together. Here’s how it goes:

First, make the dressing. Whisk together olive oil, lemon juice, garlic, Dijon mustard, salt, and pepper in the bottom of a large bowl. (Hint: this bowl should be big – you’ll add the rest of the salad ingredients to it later on!) If you haven’t already made the Vegan Sour Cream, blend that up and set it aside. 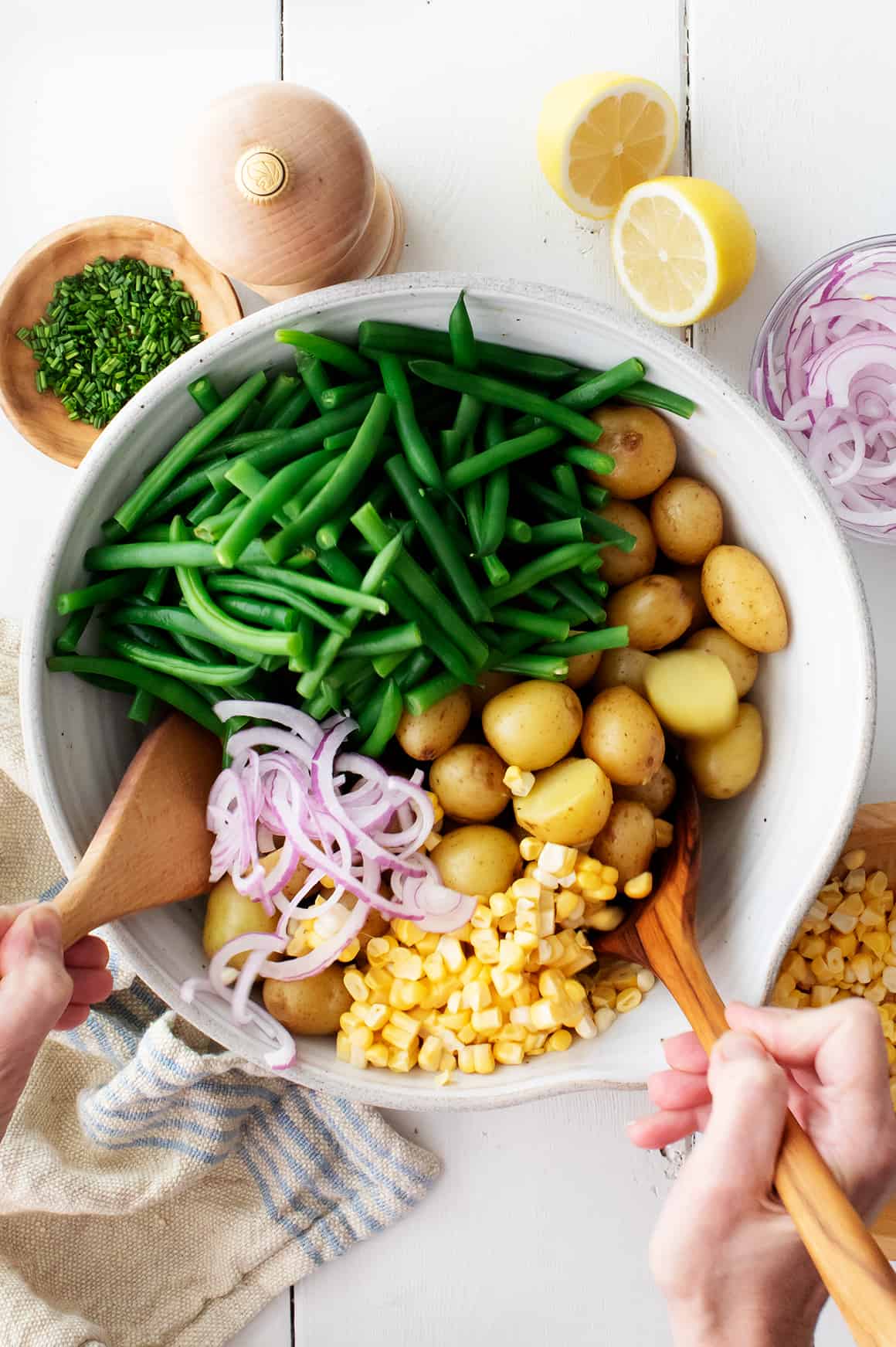 Next, boil the potatoes. I like this salad best with really little yellow potatoes so that I can leave them whole. If you have larger potatoes, I recommend slicing them in half after you cook them. While the potatoes are still warm, toss them with the dressing in the bottom of the bowl. Set them aside.

Meanwhile, blanch the green beans. When they’re tender but still bright green, transfer them to a bowl of ice water to stop the cooking process. Drain and place on a kitchen towel to dry.

Then, toss everything together. Add the green beans, corn, and red onion to the bowl with the potatoes, and toss to combine. Season to taste with more salt and pepper.

Finally, transfer the salad to a platter. Thin a few scoops of the Vegan Sour Cream to a drizzleable consistency, and drizzle it over the salad. Sprinkle on the chives and red pepper flakes, and enjoy! 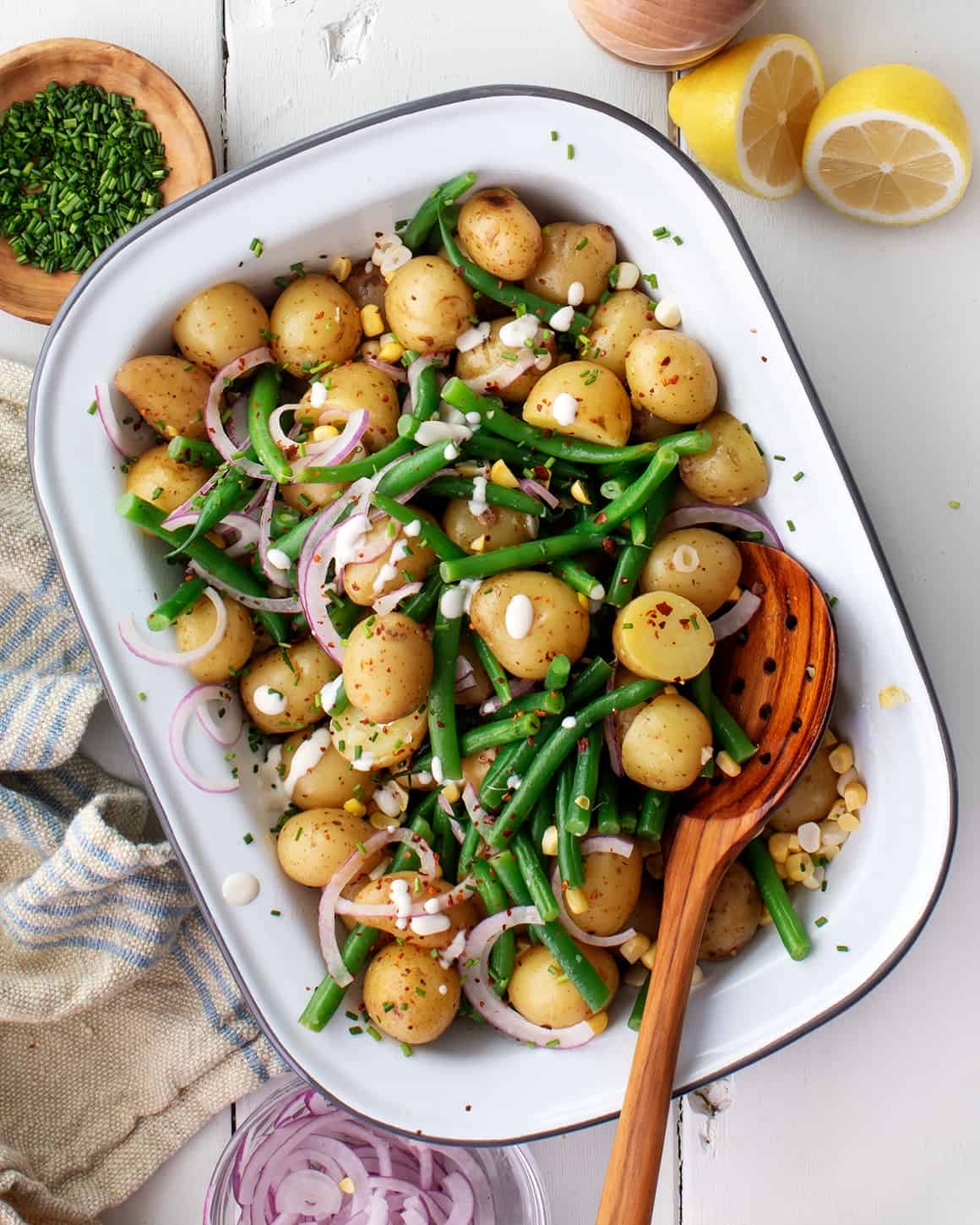 This vegan potato salad recipe is a picnic-perfect side dish. Serve it with a sandwich, like my Chickpea Salad Sandwich or Caprese Sandwich, or cookout fare like veggie burgers, portobello mushroom burgers, or black bean burgers.

If you want to get ahead, feel free to prepare the salad up to a day in advance. Just hold off on the chives and Vegan Sour Cream – the salad is best if you add them right before you eat.

When you’re ready to serve, season to taste with more lemon juice and salt – the potatoes can really soak up the seasonings in the fridge! Then add the sour cream, chives, and red pepper flakes, and dig in. 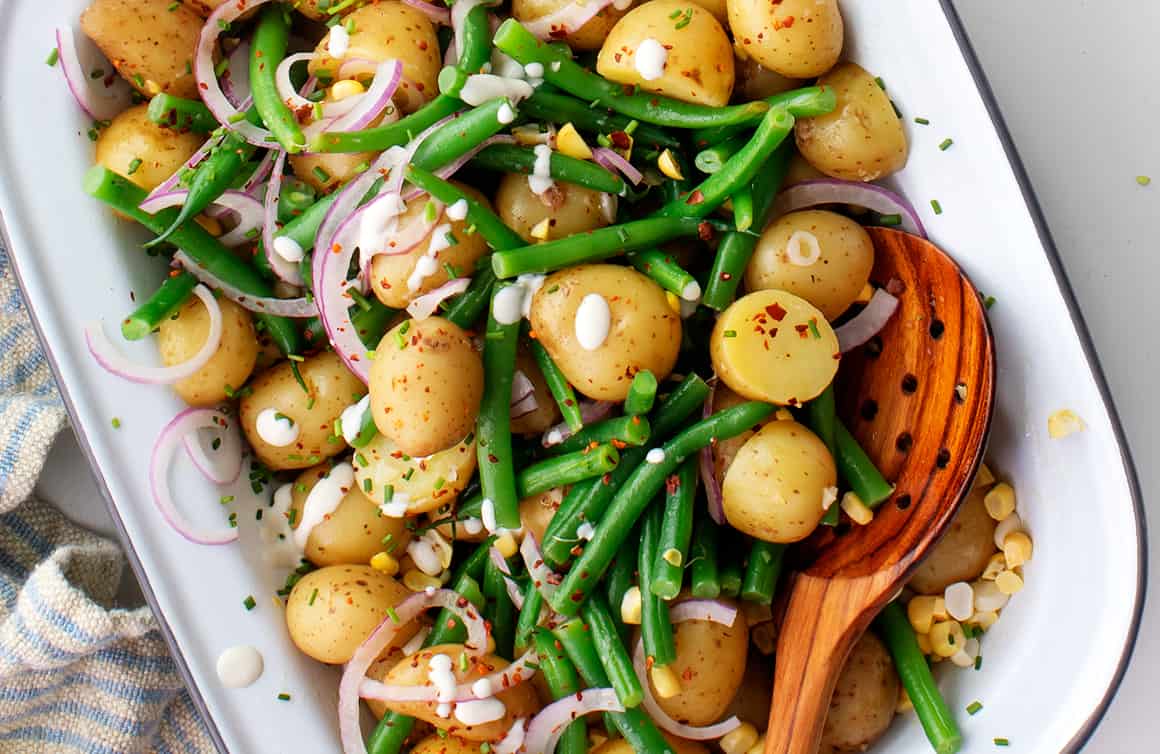 If you love this vegan potato salad recipe, try one of these vegan salads next: