For me, no fall is complete without making this easy apple crisp recipe! Filled with warm spices like cinnamon & ginger, it's cozy and delicious. 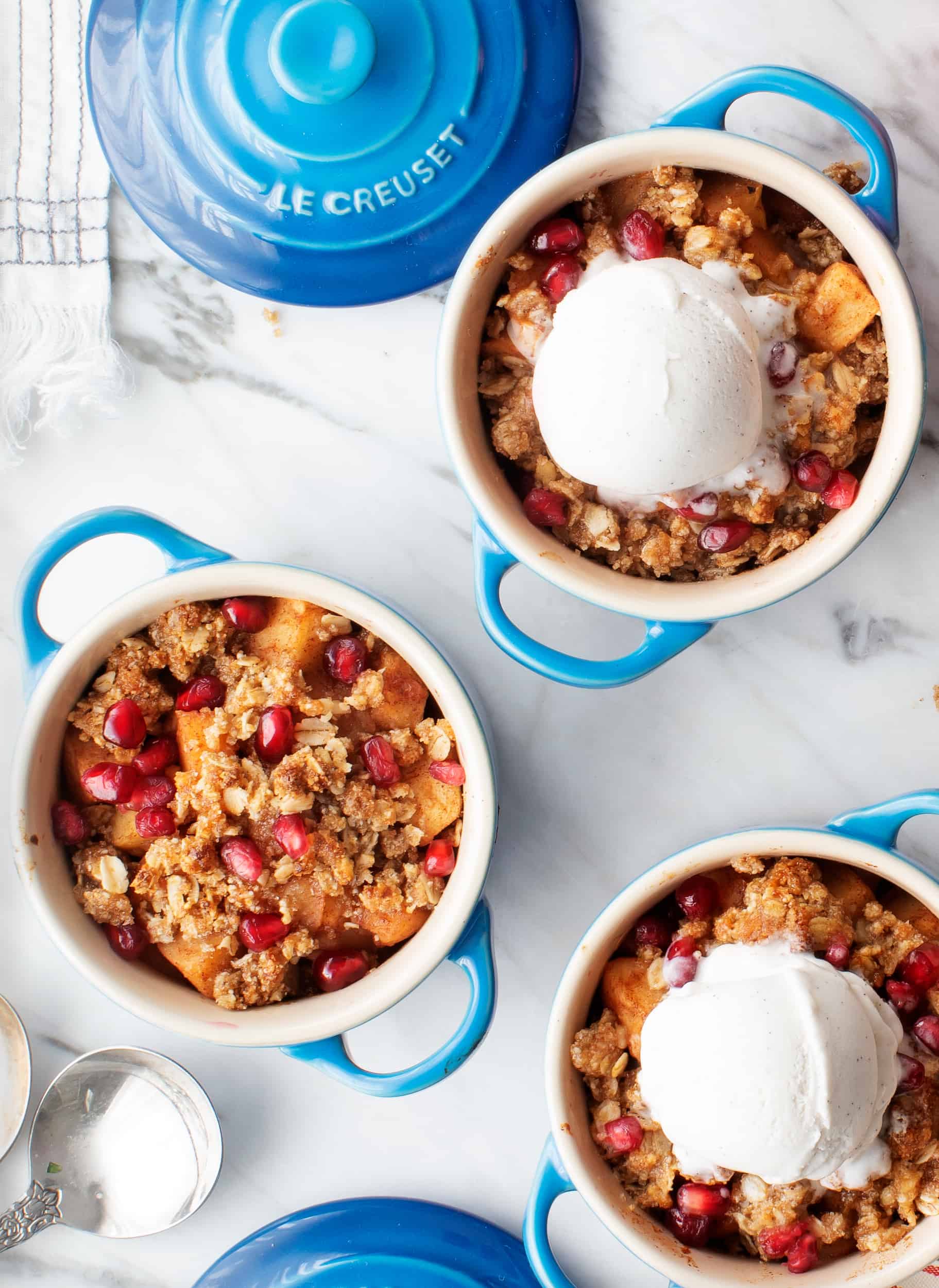 Is there anything better than warm apple crisp baking in the oven?

This easy apple crisp recipe is my go-to fall dessert. Not only is it a HUGE hit with our friends and family, but it’s also simple to make, it’s deliciously spiced, and it will make your kitchen smell amazing! 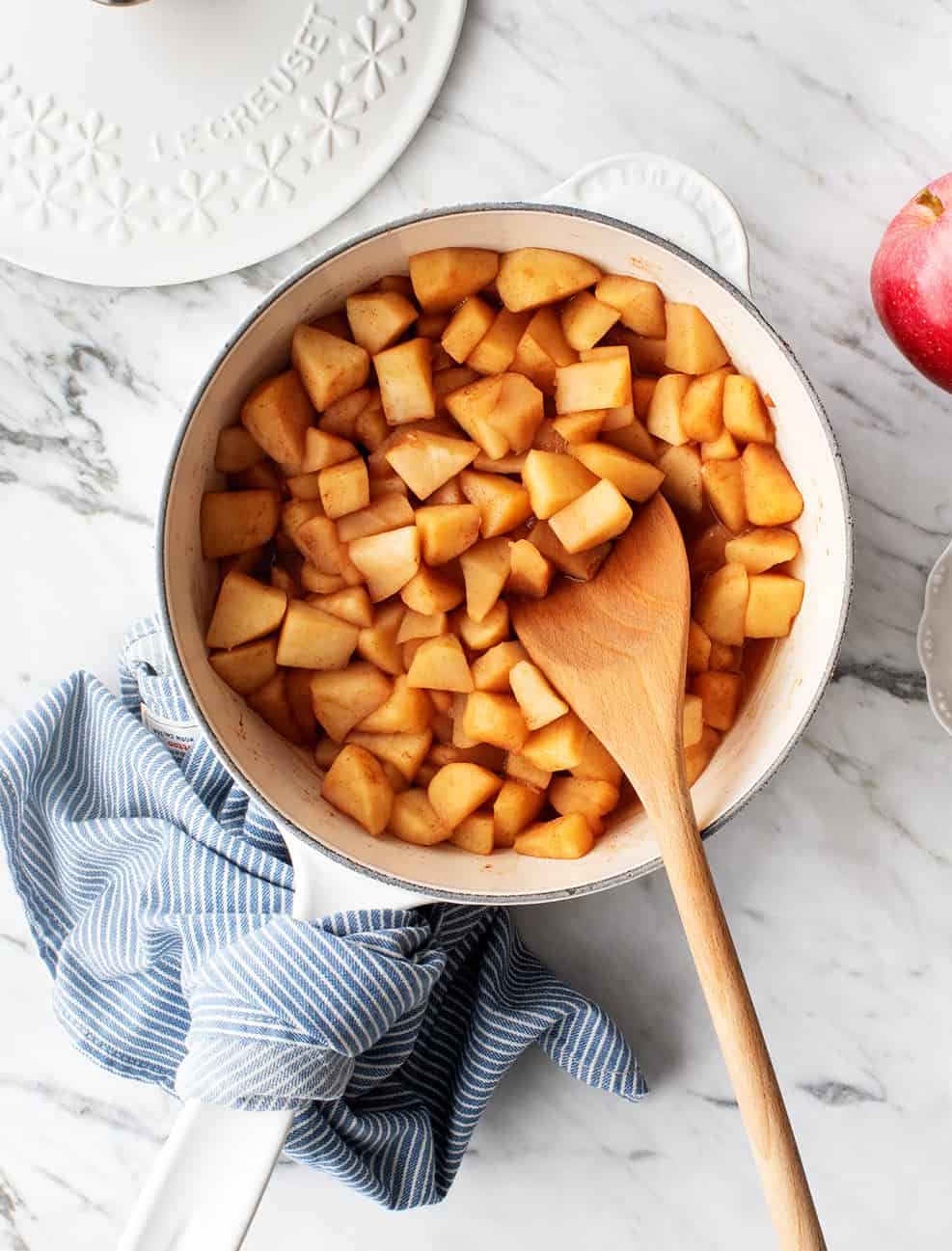 I’ve made lots and lots of apple crisps in the past, but this one takes the cake… er… crisp. It starts with warm, stewed, soft apples – I cook them down with a little apple cider vinegar (or lemon juice!) for pop. Then, I add cinnamon, ginger, and a pinch of cardamom to give them a warm, spiced flavor. Gala apples are my favorite variety for this recipe – I like their sweet/tart flavor and firm texture. But if you have a favorite baking apple, feel free to use it here. Granny smith apples, Honeycrisps, Jonagolds, or a mix would all be excellent.

I love these stewed apples so much that I could just stop here and eat them by themselves as a truly healthy fruit-only dessert. They’d also be insanely good on oatmeal or overnight oats for breakfast. 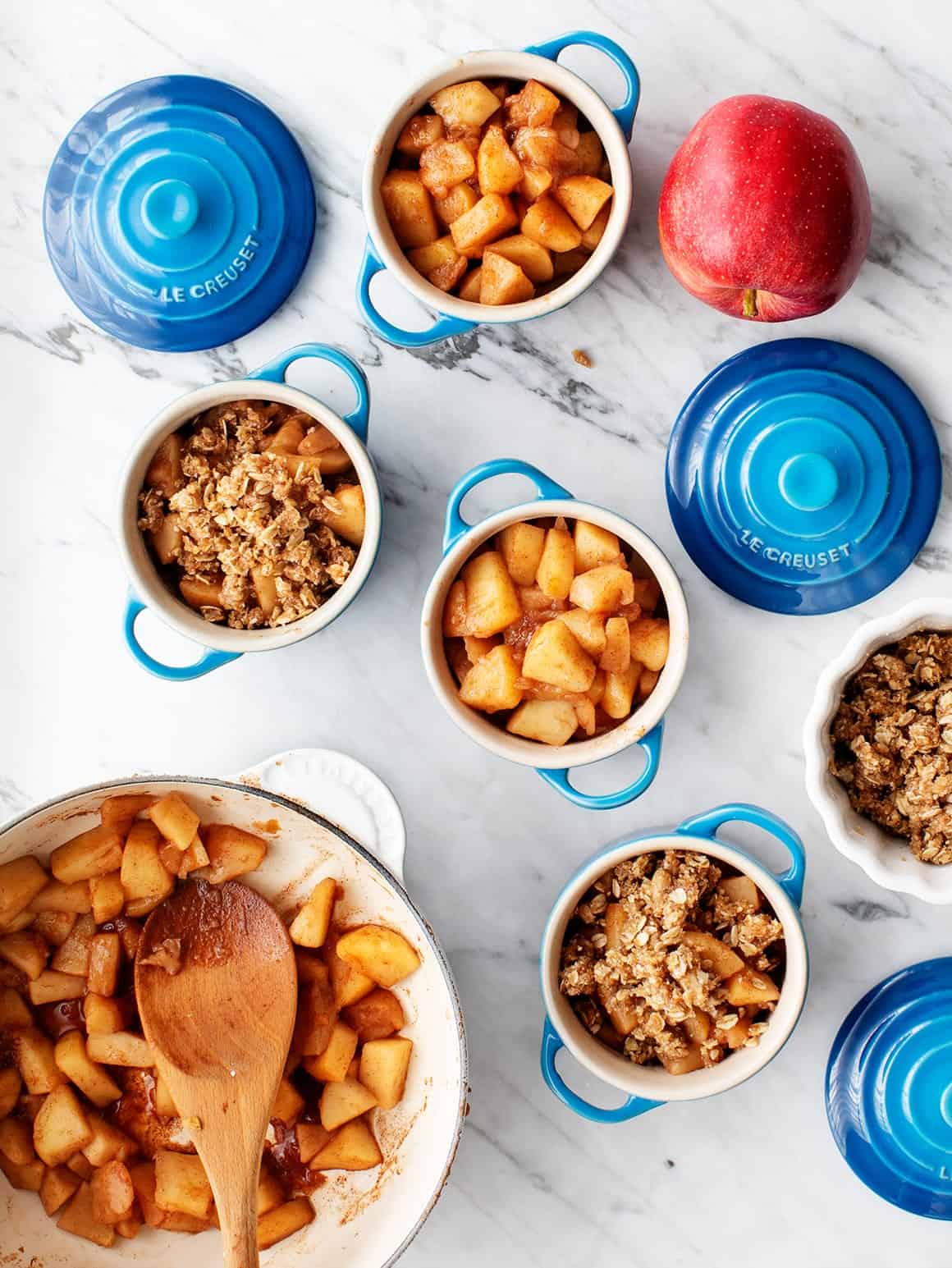 But, since this is dessert and it’s called apple crisp, let’s talk about that crisp topping! It’s a mix of rolled oats, almond flour, walnuts, coconut oil, brown sugar (or coconut sugar), and, of course, more cinnamon, because I don’t think there could ever be too much cinnamon in a fall dessert. This topping happens to be gluten-free because oats & nuts crisp up perfectly without the need for flour, and they just taste so good together. 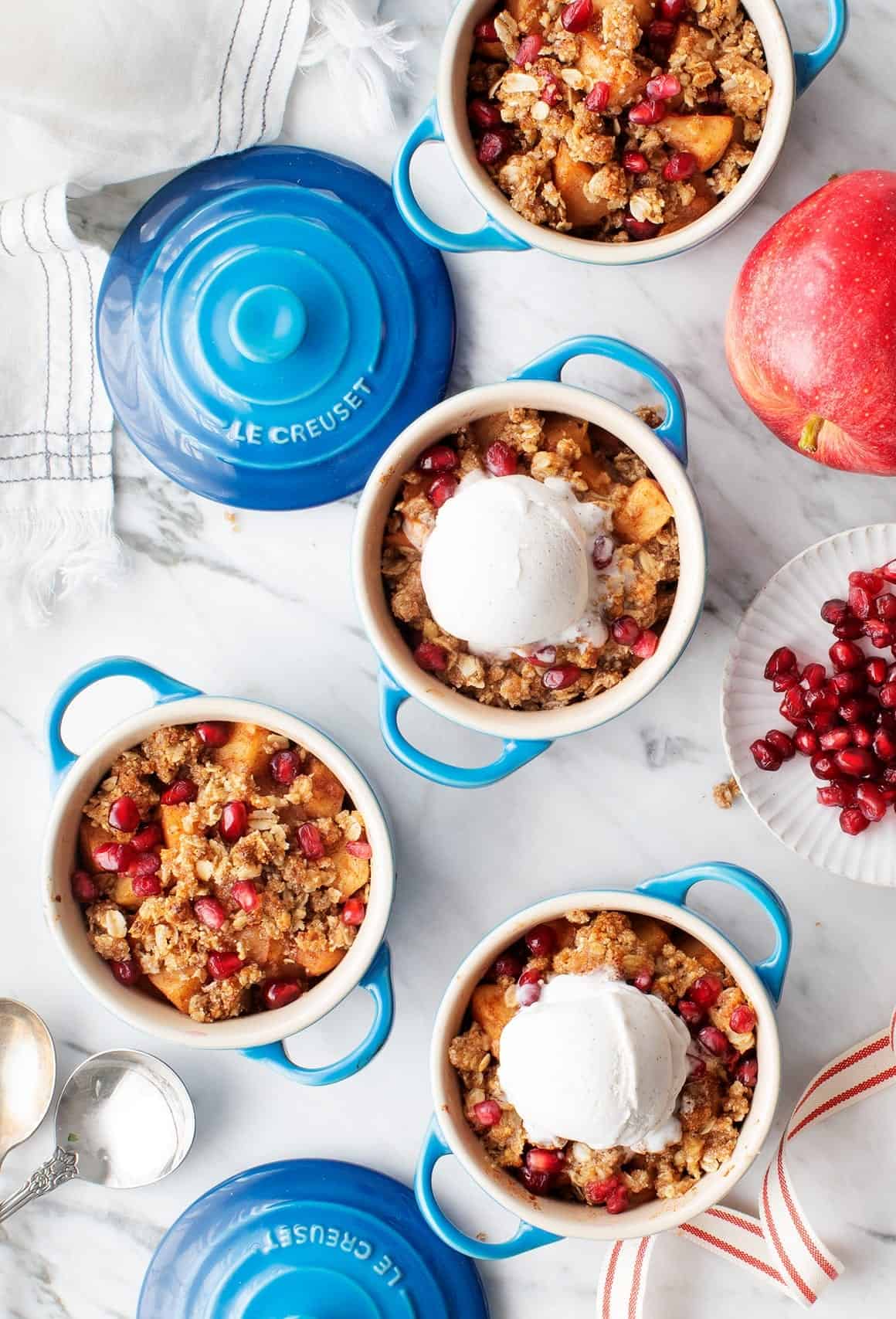 How to Make Apple Crisp in Advance

This healthy apple crisp recipe is great for entertaining because it can almost entirely be made in advance. I make the apples and the topping ahead of time and divide the the apple mixture among the ramekins. A few minutes before serving, I sprinkle the topping over the ramekins and pop them in the oven.

I like to make these extra festive by sprinkling them with pomegranates. Serve with vanilla ice cream or coconut cream, and dig in! 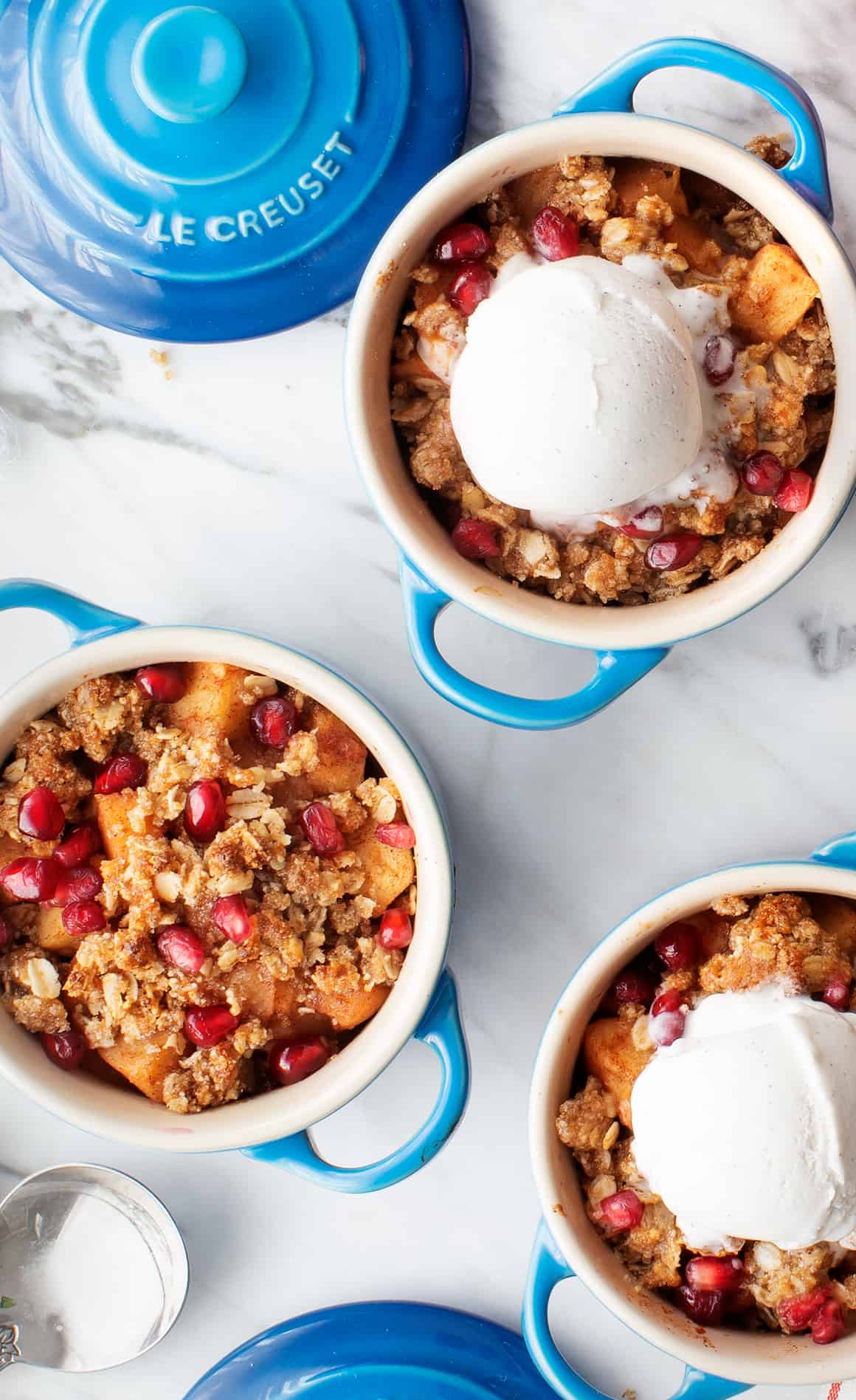 If you love this easy apple crisp recipe… 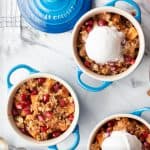