Coated in a panko and Parmesan crust, this air fryer eggplant is crispy on the outside, tender in the middle, and packed with rich, nutty flavor. 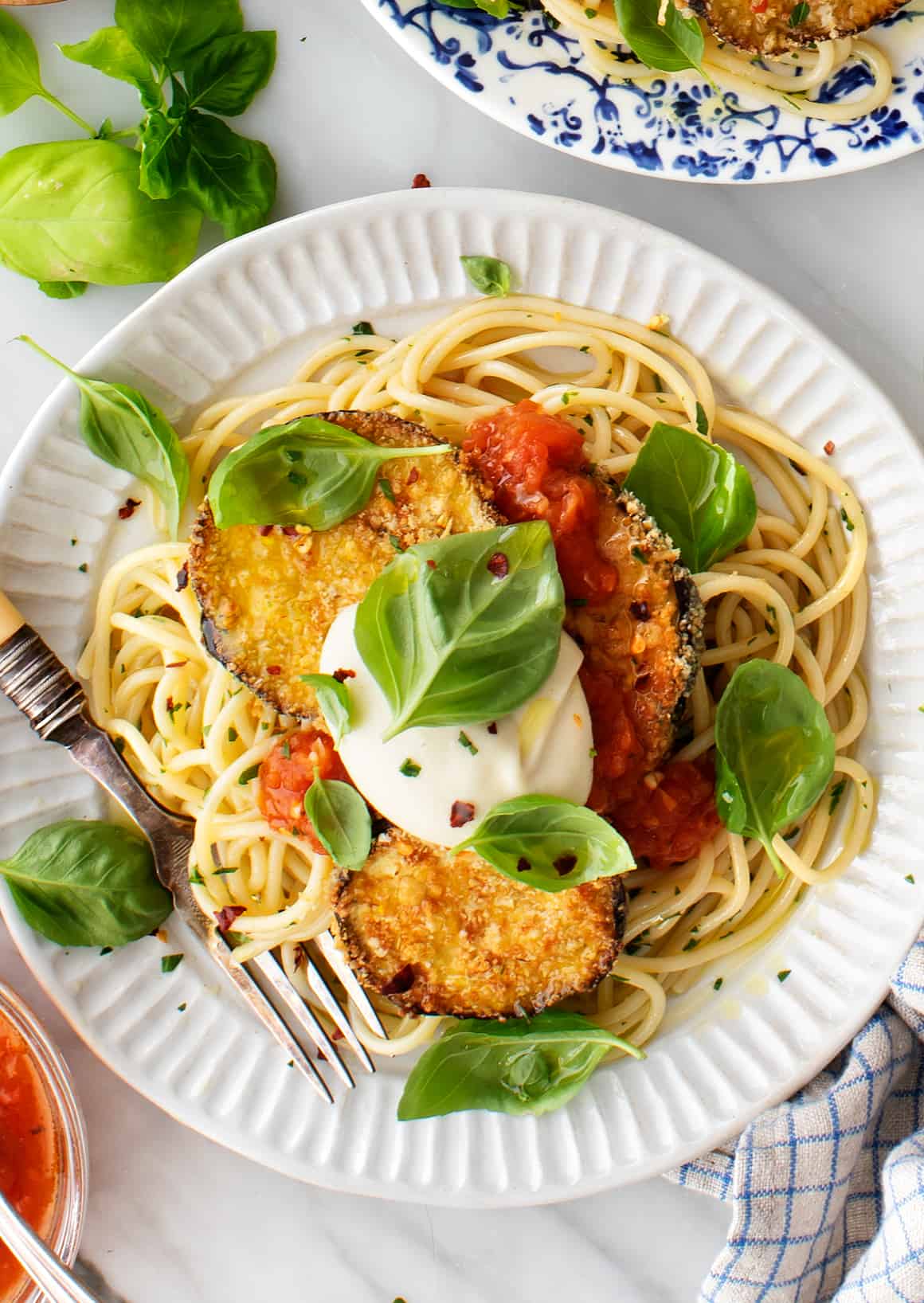 If you like eggplant Parmesan, then you’ll be crazy for this air fryer eggplant recipe! I coat eggplant slices in a mixture of panko bread crumbs, almond flour, and Parmesan cheese and then air fry them to golden brown perfection.

The slices are crispy on the outside, silky smooth in the middle, and filled with rich, nutty flavor. I’m always a fan of eggplant recipes, but without a doubt, this air fryer eggplant is one of my new favorites. 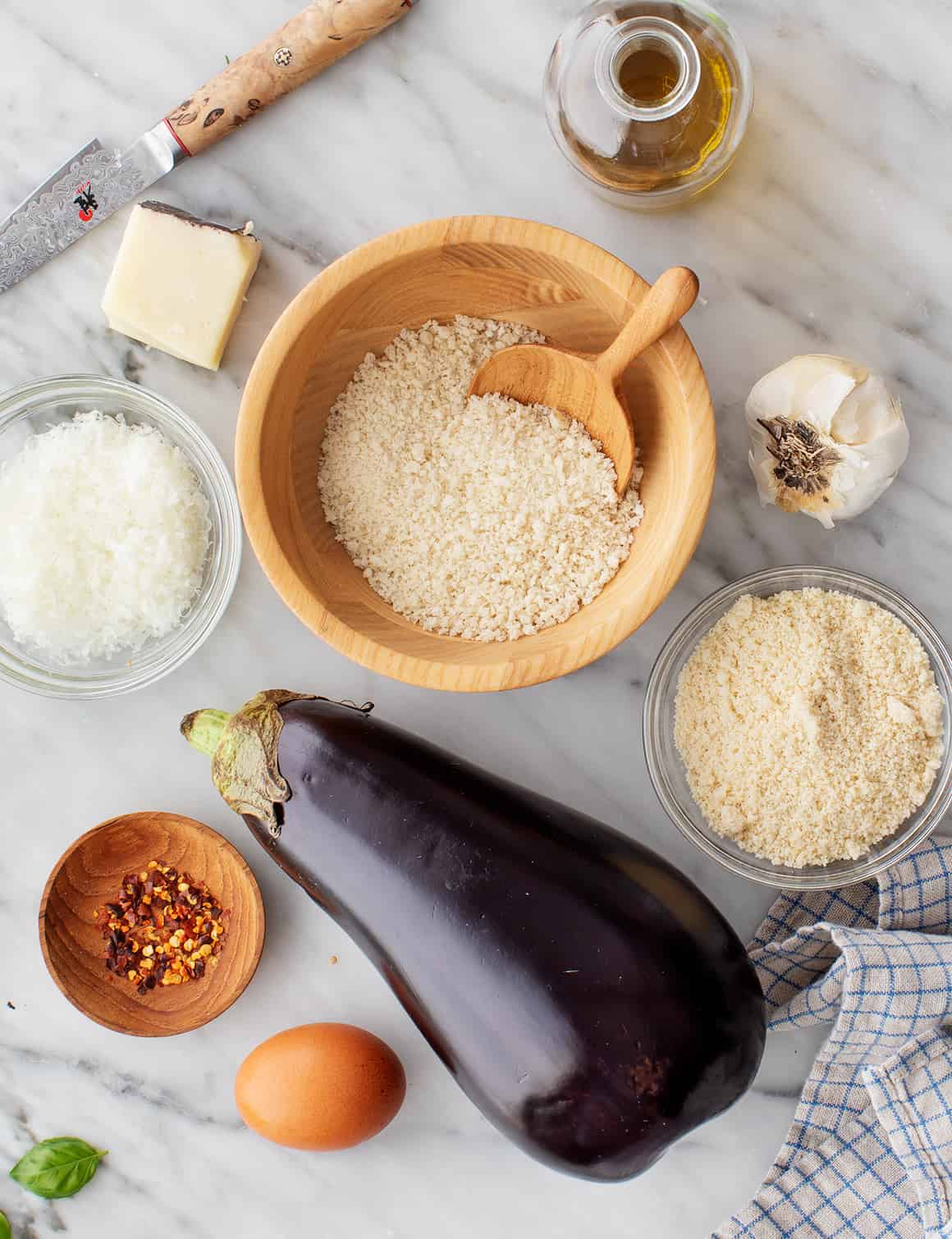 You only need a handful of ingredients to make this air fryer eggplant recipe: 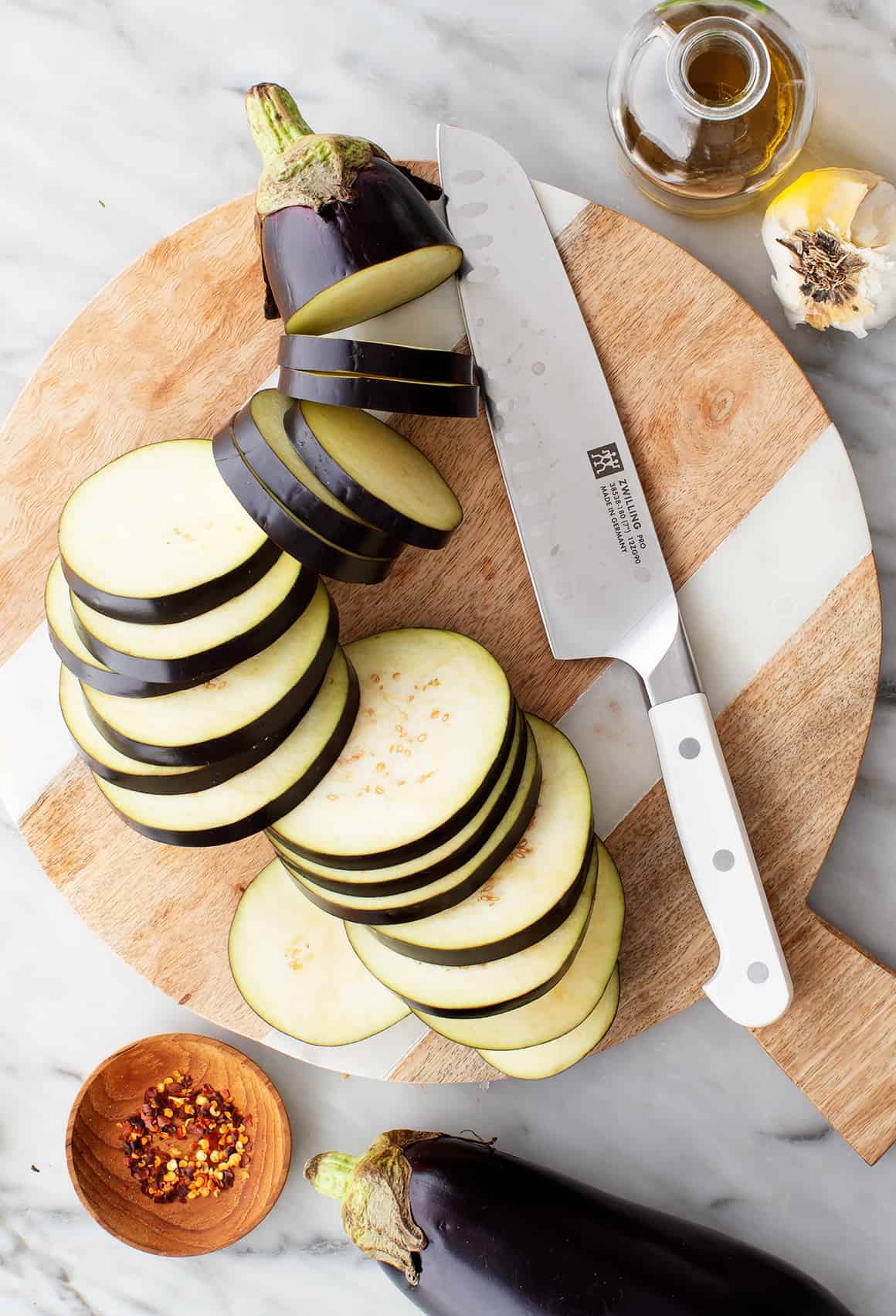 How to Cook Eggplant in the Air Fryer

Ok, I have a confession: though I haven’t been one for salting eggplant and letting it drain before cooking it in the past, I do find that it makes a difference here. This step adds some extra time to the recipe, but it’s almost entirely hands-off. In addition, the eggplant’s flavor is richer, and its texture is extra-smooth. Totally worth it, if you ask me.

So, first thing’s first! You’ll start by salting the eggplant. Toss the eggplant slices with a generous pinch of salt and arrange them in a colander in the sink. Allow them to drain for 30 minutes while you mix up the crispy coating and beat the egg. 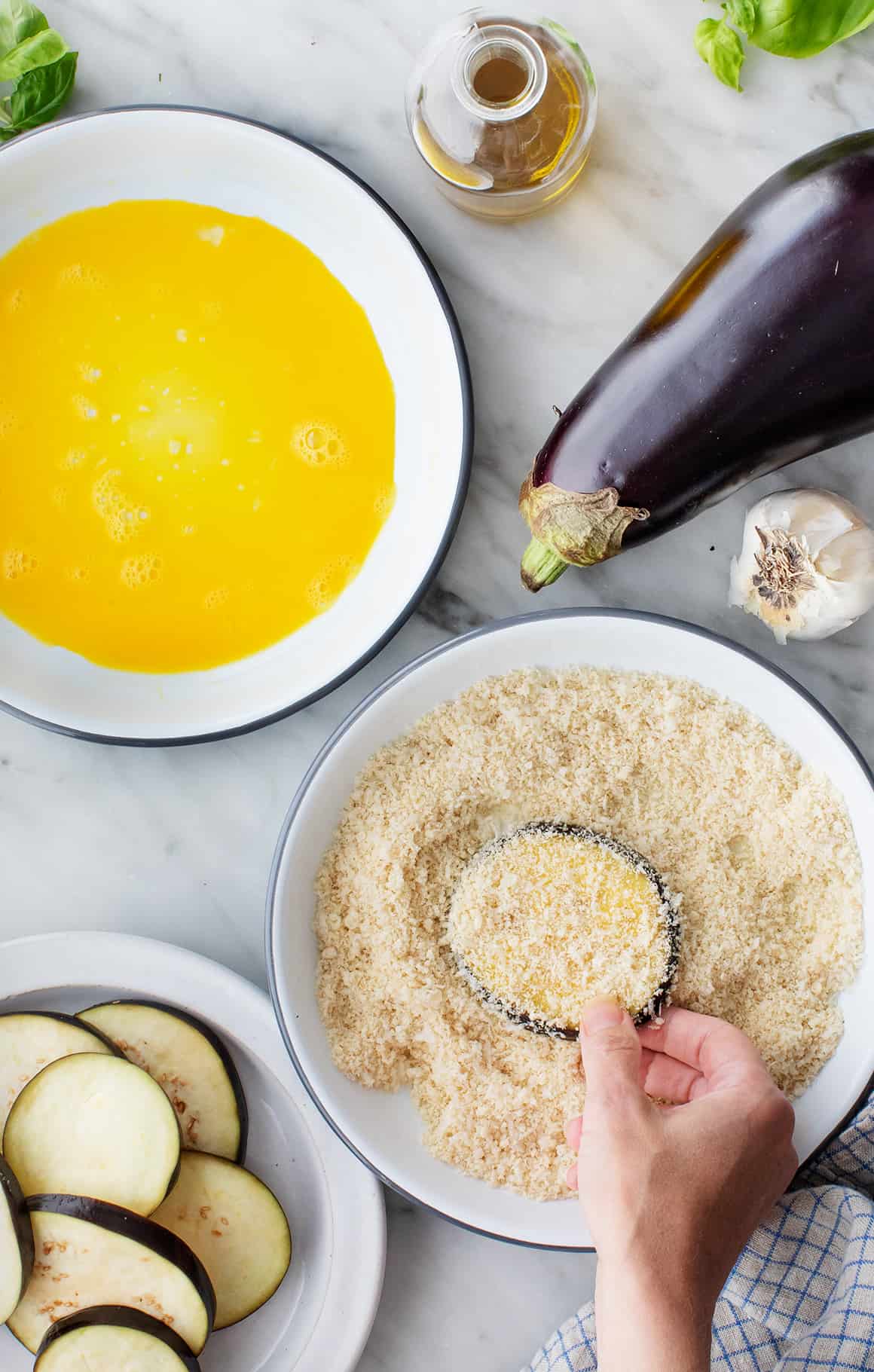 After 30 minutes, it’s time to bread the eggplant. Pat it dry with a kitchen towel or paper towels. Then, dip each slice into the egg, followed by the panko mixture. Make sure to get it nicely coated on all sides! 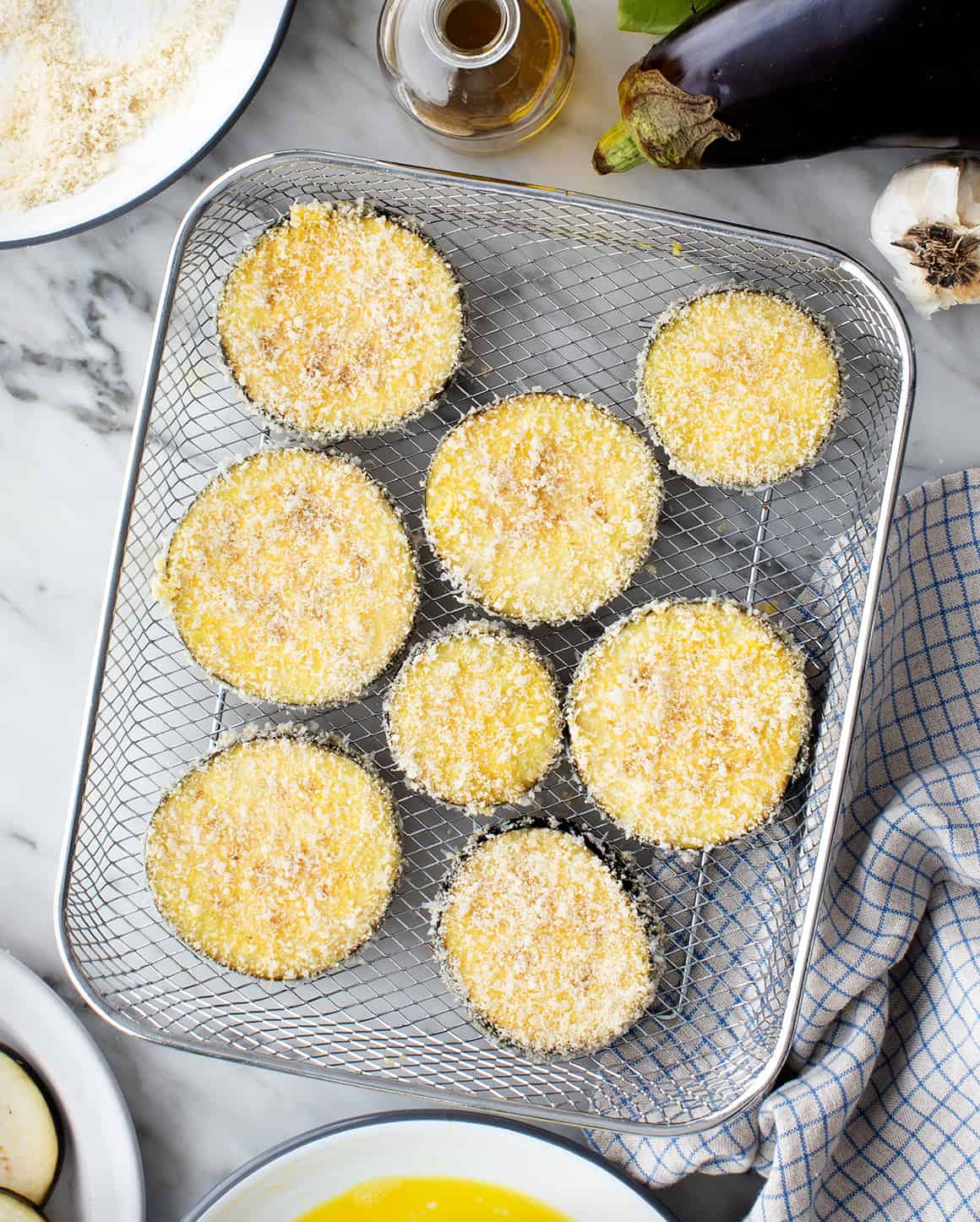 Repeat with the remaining eggplant slices and arrange them in a single layer in your air fryer basket. If you have too many slices to arrange in a single layer, you’ll need to work in batches. Stack the eggplant rounds on top of one another, and they won’t crisp up as they bake! 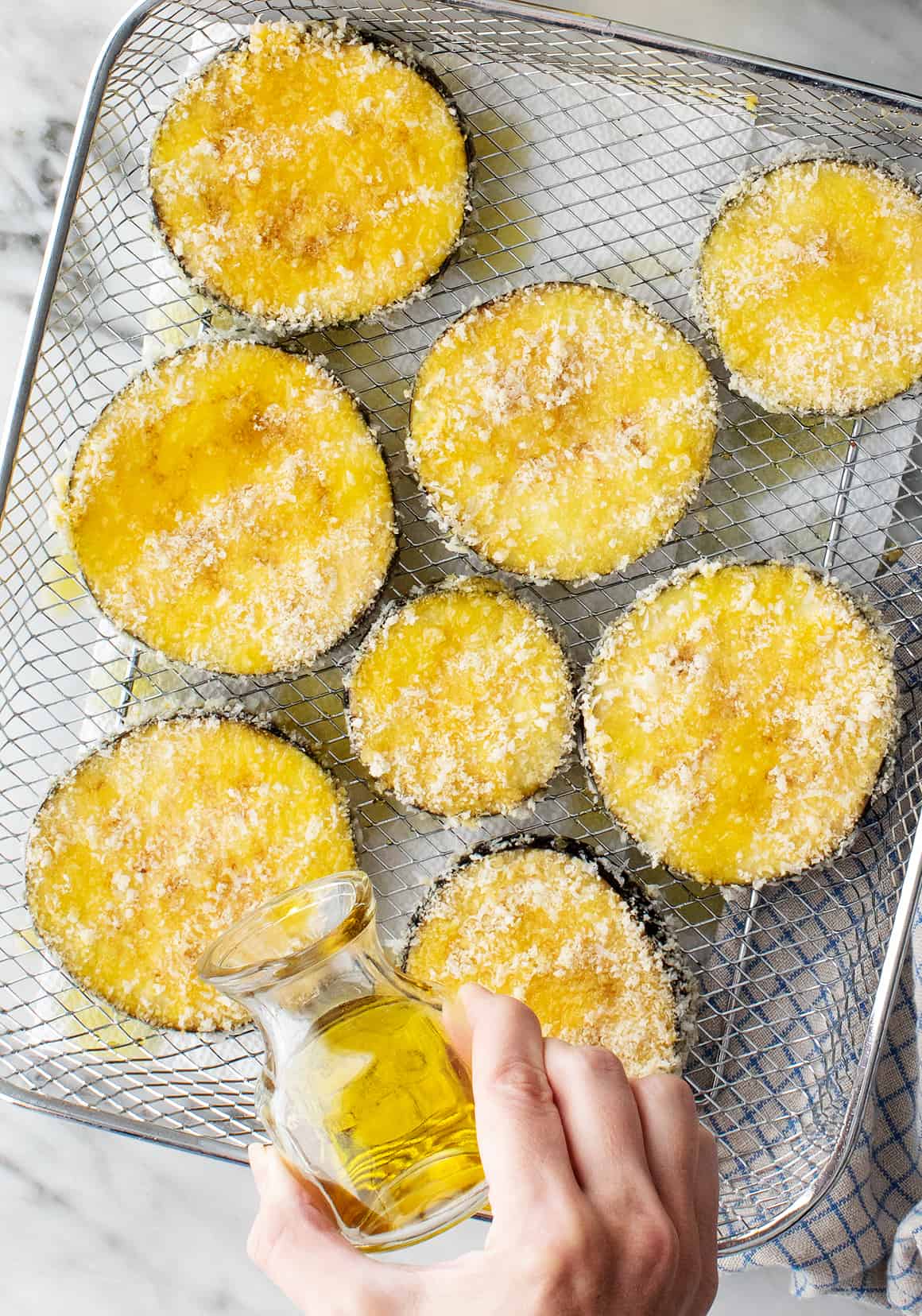 Next, cook. Drizzle the breaded eggplant generously with olive oil, and transfer it to a 370° preheated air fryer (P.S. I’ve tried many air fryers and this one is my favorite so far). Cook the eggplant until it’s crispy and well-browned, about 17-20 minutes, flipping halfway through the cooking time. 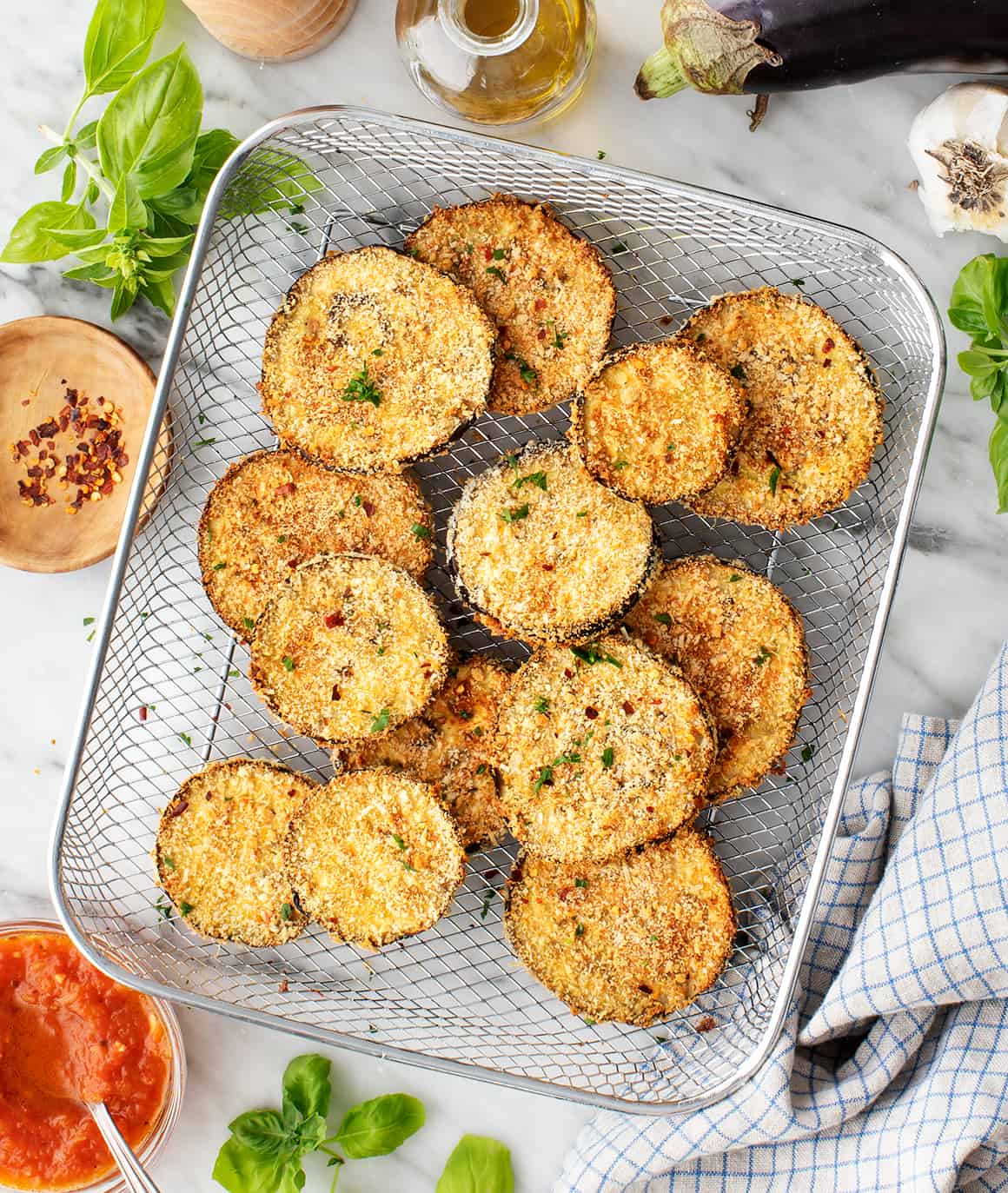 That’s it! Good luck not eating it all straight out of the air fryer basket. 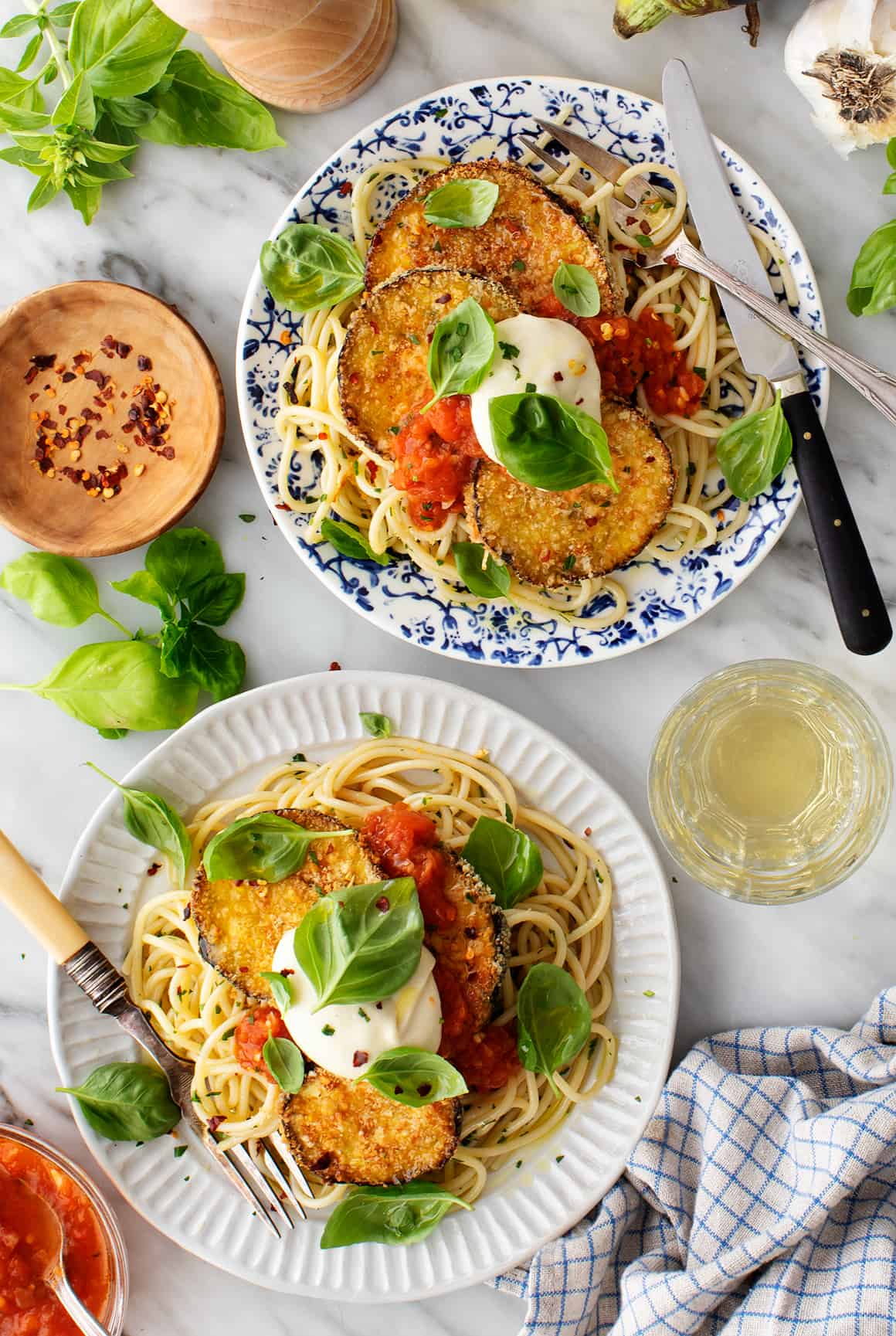 This air fryer eggplant recipe is a ridiculously tasty side dish. It pairs well with all sorts of dishes – veggie burgers, pasta, a cooked protein of your choice… Lately, I’ve loved serving it with a substantial salad for a light, yet satisfying, meal. It would be fantastic with any of these salad recipes:

But there are also times when I want to make this air fryer eggplant the main event. To serve it as an entree, I arrange it over pasta tossed with olive oil and fresh herbs. Then, I dollop on marinara or my fresh tomato sauce and top if off with cashew cream. I can’t get enough of this combination! 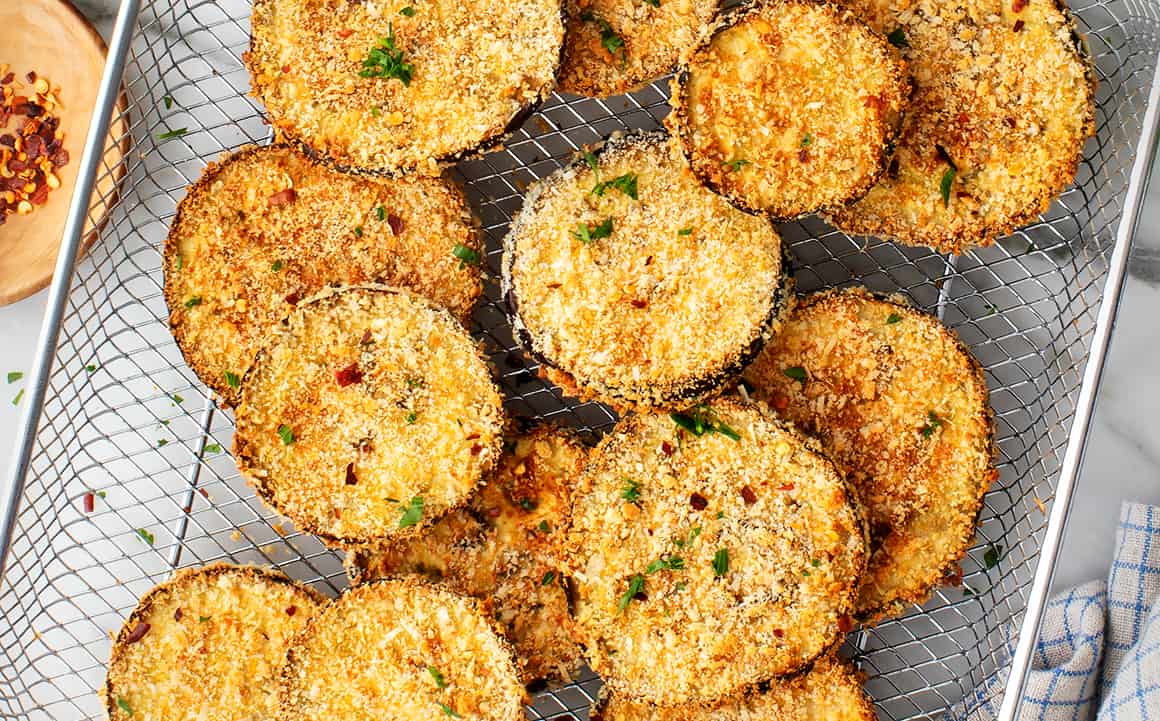 If you love this air fryer eggplant recipe, try one of these air fryer recipes next:

Looking for more eggplant recipes? Find 12 of my favorites here! 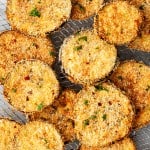 rate this recipe:
4.84 from 25 votes
Prep Time: 40 mins
Cook Time: 20 mins
Serves 4
Pin Recipe Print Recipe
Crispy and flavorful, this air fryer eggplant is one of our favorite side dishes! I also like to make it into a full meal by serving it over pasta with marinara sauce, fresh herbs, and dollops of cashew cream.

*Make this recipe vegan by replacing the egg with ¼ cup nut milk mixed with 1 tablespoon ground flaxseed. I have this Instant Pot Air Fryer and it's great.
Did you make the recipe? I want to see!
Tag @loveandlemons on Instagram.
✕
Free Bonus:
5-Part Guide to Delicious Vegetarian Eating!